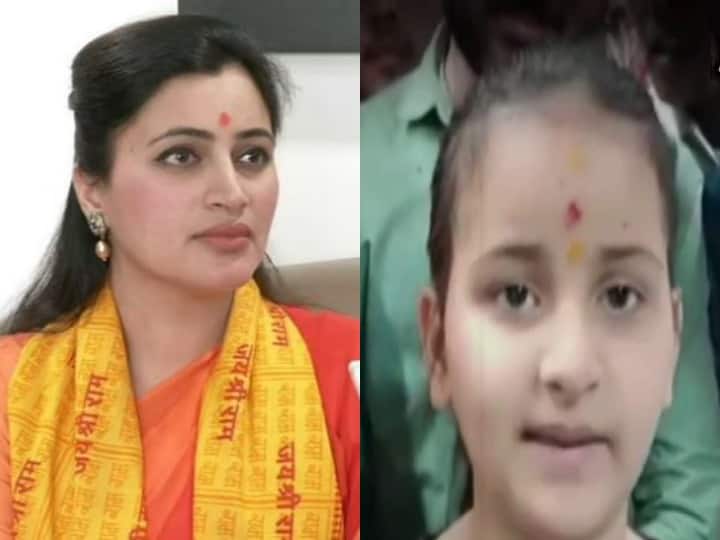 Hanuman Chalisa Row: The Hanuman Chalisa controversy of Maharashtra has now taken an emotional turn. The 8-year-old daughter of Amaravati Independent MP Navneet Rana and MLA Ravi Rana recited Hanuman Chalisa for the release of her parents. Let us tell you, Navneet and her husband are in jail for the last few days.

During the program organized at the couple’s house, their daughter Aarohi while reciting Hanuman Chalisa said that, leave my parents, I am praying for them. Let us tell you, the couple is in jail and their bail plea will be heard in the Sensation Court of Mumbai on 29th April i.e. tomorrow. In fact, Navneet and her husband had announced last week to read Hanuman Chalisa by sitting in front of CM Uddhav Thackeray’s Matoshree in Mumbai.

Maharashtra | Aarohi Rana, 8-year-old daughter of Amravati MP Navneet Rana and MLA Ravi Rana, recited Hanuman Chalisa at her residence in Amravati yesterday, April 27, for the release of her parents from jail

“I pray to God that my parents are released soon,” she said pic.twitter.com/Fu3rMCwpO9

After this announcement of the couple, there was a lot of uproar between them and Shiv Sena supporters. At the same time, after this announcement of the couple, the Mumbai Police arrested them. Sections of breach of peace, sedition were imposed on both. At the same time, Navneet Rana has now filed a complaint against Shiv Sena leader Sanjay Raut with the Delhi Police Commissioner. Navneet Rana, writing to the Delhi Police Commissioner, has demanded action by accusing the Shiv Sena MP of insulting caste words. He said in his complaint that Sanjay Raut has defamed him by calling him 420.

Assam: Will Assamese Muslims be identified as a separate community in the state? questions on proposal