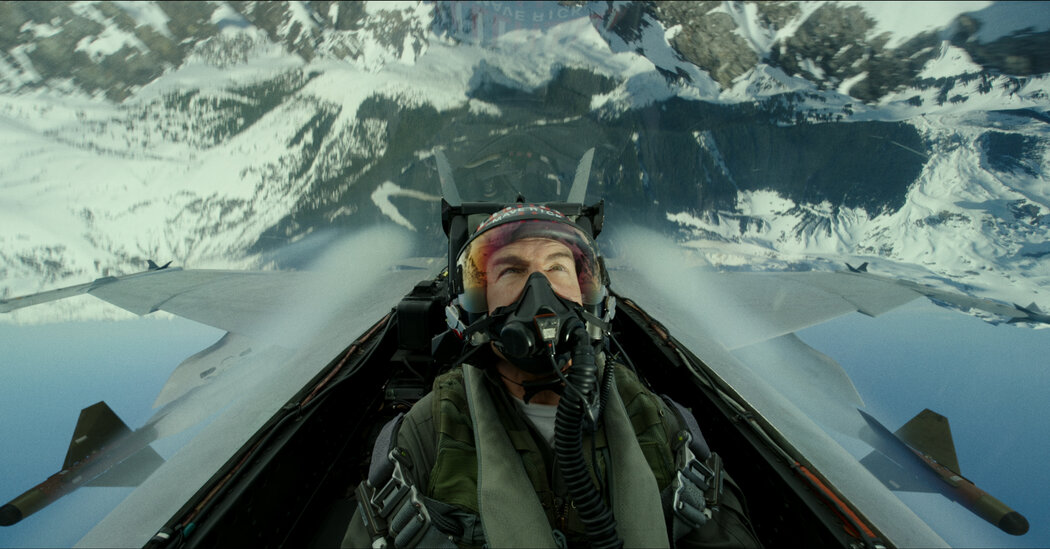 Before Tom Cruise signed on to star in the original “Top Gun,” he asked to take a test flight in a jet. Cruise wasn’t yet world famous, so when he arrived at the hangar, his long hair still in a ponytail left over from “Legend,” the pilots, according to one of the film’s producers, Jerry Bruckheimer, decided to give this Hollywood hippie the ride of his life.

Zipping at 6.5 G’s — more than twice the G-forces some astronauts endure during rocket launches — Cruise felt the blood drain from his head. He vomited in his fighter-pilot mask.

Top Gun: Maverick: He agreed to make the film.

Cruise continued to fly so fast, and so frequently, that he learned to squeeze his thighs and abs to stay conscious. His stomach adjusted to the speed. When the director Tony Scott put a camera in the cockpit, Cruise could smile for his close-ups. His castmates weren’t as prepared.

“They all threw up and their eyes rolled back in their heads,” Bruckheimer said in a phone interview. The original footage “was just a mess,” he admitted. “We couldn’t use any of it.”

“Top Gun” made Cruise a superstar — and the experience of shooting it stuck with him so much, he was convinced he needed to lead a three-month flight course for the cast of “Top Gun: Maverick,” a sequel, now in theaters, that has had 35 years to build up suspense.

In the new movie, Cruise’s Capt. Pete Mitchell (known as Maverick) readies a dozen young pilots for a dangerous mission to destroy an underground uranium plant in an enemy land. Behind the scenes, Cruise did roughly the same thing, gradually raising the actors’ aerial tolerance, and confidence, from small prop planes to F-18 fighter jets. “He’s got every kind of pilot’s license that you could possibly imagine — helicopters, jets, whatever,” Bruckheimer said.

In essence, “Top Gun: Maverick” is a 450 mile-an-hour flying-heist caper. The mission leaders devise a difficult set of challenges for the pilots: zoom low and quick, vault a steep mountain, spin upside-down, plummet into a basin and survive a near-vertical climb at 9 G’s while dodging missiles.

Cruise, a contender for the most daredevil actor since Buster Keaton, was adamant that every stunt be accomplished with practical effects. Each jet had a U.S. Navy pilot at the controls, while its actor spun like a leaf in a windstorm. The deserts and snow-capped peaks in the background are real, and so are many of the performers’ grimaces, squints, gasps and moans.

From the safety of theater seats, the audience faces its own challenge: unlearning the computer-generated complacency that’s turned modern blockbusters into bedazzled bores. The imagery of the sky and ground spiraling behind the actors’ heads in “Top Gun: Maverick” looks like it must be digital wizardry. It isn’t.

The movie’s aerial coordinator, Kevin LaRosa II, and its aerial unit director of photography, Michael FitzMaurice, filmed from above using three aircraft: two types of jets with exterior cameras mounted on wind-resistant gimbals, and a helicopter, which proved best at capturing the speed of actors whizzing by. One specialized jet could film the same scene using two different lens focal lengths to double the footage captured on a single flight. Once LaRosa heard that the long-anticipated sequel was finally going to become a reality, he also developed his own aircraft, a shiny black plane with cameras that can withstand up to 3 G’s.

“That had never been done before,” LaRosa said in a video interview. As he flew next to the cast, LaRosa dodged trees while keeping an eye on the monitors to make sure FitzMaurice, controlling the cameras from the back of the plane, had gotten the shot.

Kosinski, the director, also spent 15 months working with the Navy to develop and install six cameras in each F-18 cockpit, which meant passing rigorous safety tests and securing the military’s all-clear to remove its own equipment. Luckily, Kosinski said, there were “Top Gun” fans among the commanding officers. “All the admirals that are in charge right now were 21 in 1986, or around there when they signed up,” he said. “They supported us and let us do all this crazy stuff.”

Usually, the Navy forbids pilots from flying below 200 feet during training. One of the film’s most staggering images is of Cruise in an F-18 whooshing just 50 feet above the ground, a height roughly equal to its wingspan. The plane flew so close to the earth that it kicked up dust and made the ground cameras shake. The pilot landed, turned to Cruise, and told the superstar that he’d never do that again.

The actor Monica Barbaro didn’t know how nervous she should be when she agreed to play the pilot Natasha Trace (nickname: Phoenix).

“When I met Joe in my callback, first thing he had me sign a waver saying that I didn’t have a fear of flying,” Barbaro said by phone. “I just got goose bumps. I was so excited.”

Each flight day kicked off with a two-hour briefing for the pilots and film crew to go over every upcoming shot, movement and line of dialogue. Next, that sequence’s actors and pilots would rehearse the maneuvers in a wooden mock-up of the jet cockpit until the motions were ingrained. Then, they took to the sky to film as many takes as possible before the jet, or the performers, ran out of fuel. In the afternoon, they did it again.

Soaring above the crew, Barbaro and the rest of the cast took on a Swiss Army knife of skills. Instead of hitting her mark on the ground, she had to hit it in the air. The sun was her spotlight. A pilot’s kneeboard on her lap displayed her script, her movements and her necessary coordinates, plus reminders to check her parachute and shoulder straps, fix her hair and makeup, adjust her flight visor, flip on the bright red switch that controlled the cameras, and note down the time codes. Finally, Barbaro had to do her actual job: act.

“Tom just really encouraged everybody, if you are going to throw up, just learn how to do it and move past,” Barbaro said. “We would applaud when anyone threw up, so it became celebrated.” Glen Powell (he plays the hot shot Lt. Jake Seresin, who is called Hangman) even brandished his barf bag while gliding upside-down and flashing a thumbs up.

Barbaro held onto her lunch. But after her first dailies, she said, her face appeared so calm, it gave the impression that the clouds whooshing behind her were simply a green screen. Cruise’s training had prepared her too well.

She was sent back into the sky for a retake.