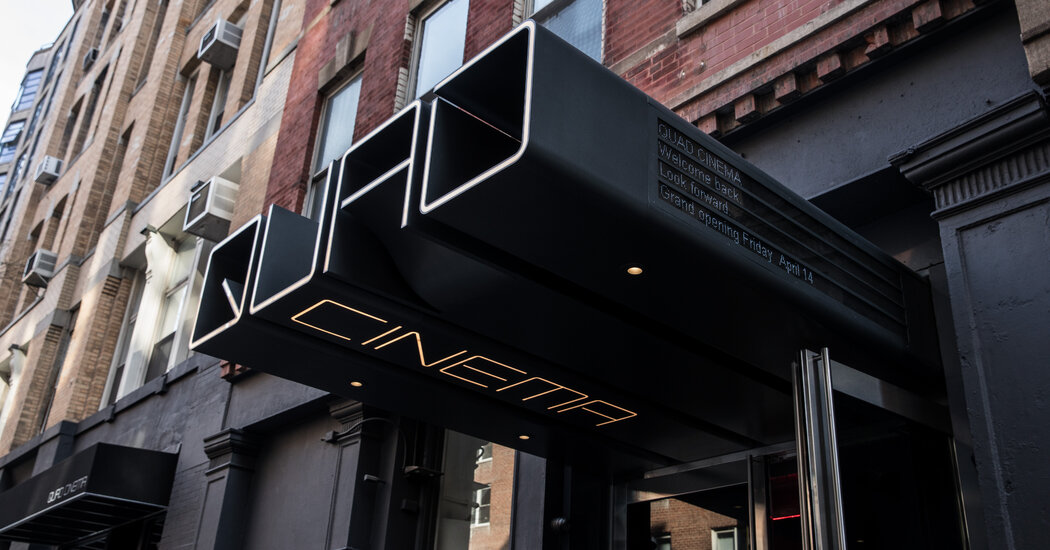 New York is the nation’s moviegoing capital, especially for cinephiles who treasure archival prints, experimental cinema and concession stands that go far beyond the standard offerings. Below is a guide to the city’s art houses.

This dine-in chain, based in Austin, Texas, has a hip aesthetic and is noted for its brews, queso and screenings of cult classics, in addition to regular showings of new releases. A revived version of Kim’s Video has set up shop within the Manhattan location. A Staten Island theater is scheduled to open this summer.

The original Angelika Film Center is the downtown six-screen theater where you can catch art-house releases, like “Petite Maman” or “Anaïs in Love,” while the subway rattles underneath. The brand name has also been appended to the Village East, whose main auditorium is a gorgeous old Yiddish stage theater. In addition to showing new releases, it hosts “The Rocky Horror Picture Show” and periodic revival screenings, and like its uptown sibling, the Cinema 123, it is equipped to show 70-millimeter film.

New York’s polestar of avant-garde film (and the preservation of it) for more than 50 years, Anthology was started by some of experimental cinema’s most important promoters (Jonas Mekas, P. Adams Sitney) and practitioners (Stan Brakhage, Peter Kubelka). In addition to retrospectives, the theater hosts a rotating series, Essential Cinema, that is free with membership; programming includes seminal narrative works by Alexander Dovzhenko and F.W. Murnau and medium-expanding nonnarrative films from Ken Jacobs and Michael Snow.

At any given time in the main BAM building in Fort Greene, three out of four screens show new releases, while one holds retrospectives, such as ones on films shot in New York City in the 1990s or others that place David Lynch’s work alongside movies he influenced. Occasional screenings take place at the BAM Harvey Theater a few blocks away.

Lincoln Center’s film arm, the hosting organization of the New York Film Festival, runs a year-round theater with one of the largest screens in town: the Walter Reade. There you can catch adventurous revivals, such as programs on the Hungarian director Marta Meszaros or the Japanese actress-director Kinuyo Tanaka, and contemporary series, like the annual Rendez-Vous With French Cinema. Across the street is the Elinor Bunin Munroe Film Center, which houses two screens and a food-and-wine bar, Indie.

A New York institution for more than 50 years — it has been at its present location since 1990 and added a fourth screen in 2018 — Film Forum hosts some of the most extensive retrospectives in town, often showing dozens of films from a director or from stars like Toshiro Mifune and Sidney Poitier. Regular attendance constitutes a cinematic education in itself, and the popcorn, to which moviegoers apply sea salt themselves, is a delicacy.

This classy venue with excellent sightlines hosts screenings on Tuesdays. The programming consists of new and vintage films from France, with English subtitles, bien sûr. Series typically have a theme — it might be Wes Anderson selecting favorites by Ophüls and Truffaut or a program of recent French comedies.

This Greenwich Village five-screen theater boasts four first-rate auditoriums (and one cubbyhole) and typically shows many more than five movies in a given week, usually with a short beforehand. Shows can start as early as 10 or 11 a.m. and, on the weekends, as late as midnight. The concession stand sells T-shirts that substitute directors’ names for those of heavy metal bands.

This theater’s annual Japan Cuts series is probably the largest single showcase of recent Japanese cinema on the New York cinephile’s calendar. For the rest of the year, new movies share screen space with classics, often shown on 35 millimeter.

This microcinema, which specializes in experimental film and typically holds screenings on Tuesday nights, hosted its final program at its longtime Greenpoint location in April. It will reopen by June on Stagg Street. Past screenings have varied widely; they’ve included early work by William Castle, a four-hour Mexican serial from 1919, Hollis Frampton and Owen Land films on 16-millimeter and a marathon of “Police Squad!” episodes.

This small (about 60 seats) Harlem venue specializes in documentaries — it was founded by the director Albert Maysles, of “Grey Gardens” fame. The programming often places an emphasis on social issues and local artistry.

An ever-changing (and expensive!) selection of international candies, a nook of a bookstore and a high-class restaurant, the Commissary, are among the features of this Lower East Side two-screen venue, which opened in 2016. (Many don’t notice, but it sits across the street from the neglected Loew’s Canal Theater.) The retrospectives, such as a recurring series of the programmers’ favorites, organized alphabetically, have a correspondingly artisanal feel.

MoMA has been showing movies since the 1930s, when Iris Barry, the museum’s first film curator, helped advance the idea that films should be collected as art. Today the institution’s two main theaters screen films from its own collection and archives around the world (the annual series To Save and Project highlights recent preservation work). Admission to most screenings is free with membership.

Museum of the Moving Image

The high ceilings and blue wall padding give a faintly futuristic feel to the 267-seat Redstone Theater, the main auditorium in this museum in Astoria. That works well when a favorite like “2001: A Space Odyssey” is playing on 70 millimeter. More specialized fare sometimes is shown in the Bartos Screening Room down the hall.

These stylish dine-in theaters have several screens that show new releases and perennial favorites (“Carrie,” “Face/Off”) from brunch time to midnight-snack time. Both venues have bars.

Once a go-to destination for French cinema and films with a literary pedigree, the Paris briefly closed in 2019, but then was leased by Netflix, which uses it for theatrical runs of its streaming titles (like Jane Campion’s “The Power of the Dog”) and older movies intended to complement them. It’s one of the few remaining New York theaters with a balcony.

When this Greenwich Village theater opened in 1972, having four screens was unusual. (“A new way to go to the movies,” boasted a New York Times ad on the first day.) It reopened in 2017 after a renovation that gave it bigger, comfier seats for viewing new art-house releases, like “A Hero” or “We’re All Going to the World’s Fair.” Plus, there’s an adjoining bar.

Located in the basement of the Roxy Hotel, this plush red screening room offers a mix of revivals (often on 35-millimeter film) and second-run programming — recent releases that have been in theaters awhile.

A grungy Williamsburg microcinema started in 2010, Spectacle has a calendar as eclectic as it is inscrutable. There’s horror and martial-arts fare that tends toward the obscure, along with a lot of international titles that never turn up in other New York venues.

One of the original Loew’s Wonder Theaters — movie palaces built in the late 1920s, with one in each borough except Staten Island (Jersey City got it instead) — this architectural marvel in Washington Heights is an attraction in itself. It’s now run by an organization that promotes interfaith artistic events, but the theater also hosts concerts and, generally once a month, movie screenings. Lin-Manuel Miranda, a neighborhood resident, chipped in for a new screen and projector.