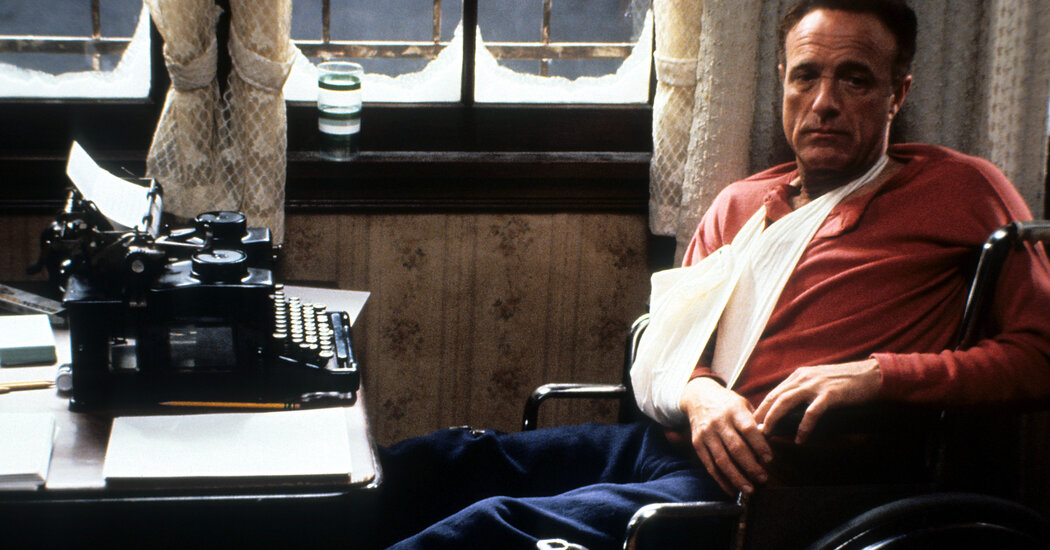 When James Caan’s family announced his death on Thursday, it sent shock waves through cinematic circles — not because his passing was particularly premature (he was 82), but because he seemed such a vibrant and outsize personality, you figured he just might live forever.

He hadn’t retired, or even slowed down much, in old age. He co-starred (with Ellen Burstyn, Jane Curtin and Ann-Margret) in “Queen Bees” last year and has another film still due out. More than that, he had maintained an active presence on Twitter, frequently sharing images from his films and memories of his collaborators and always concluding his messages with the phrase “End of tweet.”

Yet Caan was a series of contradictions: a Jewish actor best known for playing an Italian, a leading man who never quite became a movie star, an actor equally adept at playing strength and weakness, rage and vulnerability. His attack on his abusive brother-in-law in “The Godfather” is one of the most visceral scenes of violence in movie history. But just the year before, he had starred in a film still remembered for its ability to make men cry. We’ll begin our look at his long, varied career there.

Caan had already banked several years of television work and a handful of juicy film roles (including memorable appearances in Howard Hawks’s “El Dorado” and “Red Line 7000” and Robert Altman’s “Countdown”) when he starred in this “ABC Movie of the Week.” Caan and Billy Dee Williams starred as the real-life Chicago Bears teammates Brian Piccolo and Gale Sayers, the first interracial roommates in the history of the N.F.L. and best friends until Piccolo’s untimely death from cancer in 1970. Caan and Williams’s easy rapport sells the relationship, and Caan is truly heartbreaking in the closing scenes, which prove a too-rare showcase for his tenderness and warmth.

Stream it on Paramount+. Rent it on Amazon, Apple TV, Google Play, Vudu and YouTube.

Caan’s breakthrough role came the following year in Francis Ford Coppola’s sensational adaptation of the best seller by Mario Puzo. The director — who had used Caan to great effect, in a much gentler role, in “The Rain People” (1969) — cast the actor as Sonny, the hot-tempered oldest brother in the Corleone clan. The studio wanted Caan to play Michael (executives didn’t care at all for this Pacino kid Coppola was stuck on), but the filmmaker knew Caan had the mixture of ladies’ man charisma and brute force so essential to Sonny. It was a scene-stealing role, and Caan took advantage of it, playing the character’s many memorable moments to the hilt: his memorable in flagrante delicto entrance, his mocking “bada bing!” moment with Michael, that street-fight humiliation of his brother-in-law and, most of all, his shocking, bullet-ridden last gasps on the Jones Beach Causeway.

As with most of the actors associated with “The Godfather,” Caan was quickly elevated to leading roles in the wake of its astonishing success. The best of that bunch may well have been this spiky tale of a privileged English professor who finds that his high-society pedigree and formidable intellect are no match for a spiraling gambling addiction. Caan’s duality — his ability to seem to move between worlds, ethnicities and classes — was rarely more effective than here, as his Axel Freed must seem at home both in the classroom, lecturing about the works of Dostoyevsky, and in the back rooms of New York’s seedy gambling underbelly, trying to buy more time from his bookie.

Rent or buy it on Amazon, Apple TV, and Vudu.

In our current cinematic landscape, an actor who fronts critical successes like “The Godfather” and “The Gambler” is usually ripe for picking by the Superhero Industrial Complex, handed a nice payday and an easy shoot in exchange for lending class and gravitas to a popcorn movie. Caan’s taking the lead in Norman Jewison’s big-budget sports movie could have looked like the same move, downshifting his considerable onscreen intelligence into something a bit brawnier. But “Rollerball” is no typical sports movie. Set in the then-distant future of 2018, it’s a prescient warning of the dangers of corporate overreach, overt violence and class warfare in sports entertainment — and society in general — and Caan conveys both the character’s fierce physicality and his intellect with ease.

Caan turned in arguably his finest performance — and certainly his most soulful — in this astonishing combination of crime movie and middle-age melodrama from the writer-director Michael Mann (“Heat”). Mann specializes in working-class criminals, guys who see their work as a job and nothing more, a way to make a living without punching a clock. Few actors understood that character like Caan, who plays the safecracker, jewel thief and ex-con Frank as a man who will break the law but not his moral code, and who so longs for the fruits of his labor that he carries around a collage of his imagined perfect, suburban life like a mobile vision board. Caan wears the heaviness of the character like a winter coat; he does what he has to do to get by, forever grasping for the last big score that always seems just out of reach.

Stream it on Showtime. Rent or buy it on most major platforms.

Caan spent much of the ’80s in a self-imposed exile, burned out from his busy ’70s, battling addictions and caring for his children. He stepped back into the industry with this Rob Reiner adaptation of Stephen King’s best seller, but did so with a generosity of spirit: Rather than choosing a solo vehicle that would show off his gifts, he took the decidedly secondary role of bedridden novelist Paul Sheldon and ceded the spotlight to the relative newcomer Kathy Bates, who had the much showier role of his obsessed superfan Annie Wilkes. She won an Oscar, and thanked him profusely in her acceptance speech: “I really am your No. 1 fan, Jimmy.”

Caan spent the ’90s easing into his new position as a respected character actor, with copious supporting roles both in film and on television. The remnants of Sonny Corleone made him a no-brainer for villain roles, and he played them well, but some of his most memorable work inverted and confounded those expectations. One of the best examples was this romantic comedy from the writer-director Andrew Bergman, starring Nicolas Cage as a newlywed who gambles away a weekend with his wife (Sarah Jessica Parker) to Caan’s high roller. On paper, the character is reprehensible — but Caan invests him with a lovelorn sweetness that lends the picture, and its central conflict, some unexpected ripples.

Stream it on HBO Max. Rent it on Amazon, Apple TV, Google Play, Vudu and YouTube.

Caan may have had visions of John Travolta’s “Pulp Fiction” comeback when he accepted a supporting role in the up-and-coming Wes Anderson’s debut feature, a cockeyed caper picture about a crew of incompetent criminals. It didn’t have the same result — the film didn’t find its audience until years later, after Anderson had established himself — but Caan’s unsung comic side shines in the role of Mr. Henry, an imposing criminal mastermind (and the proprietor of a successful landscaping firm). It was one of his finest late-career performances, deploying his still-potent tough-guy demeanor and undercutting it with unexpected, self-aware wit.

When you live and work for as long as Caan did, you become beloved by each generation for a different role, and if boomers loved him for “The Godfather” and Gen Xers for “Bottle Rocket,” this smash family comedy endeared him to Generation Z. A lesser actor, cast in the role of the father to the North Pole elf Buddy (Will Ferrell), might’ve winked or mugged and ruined the whole thing; Caan wisely played this harried dad close to the bone, keenly aware that the straighter his face, the funnier his scenes. Drama, comedy, suspense, action, kids’ movies — there was truly nothing James Caan couldn’t do.