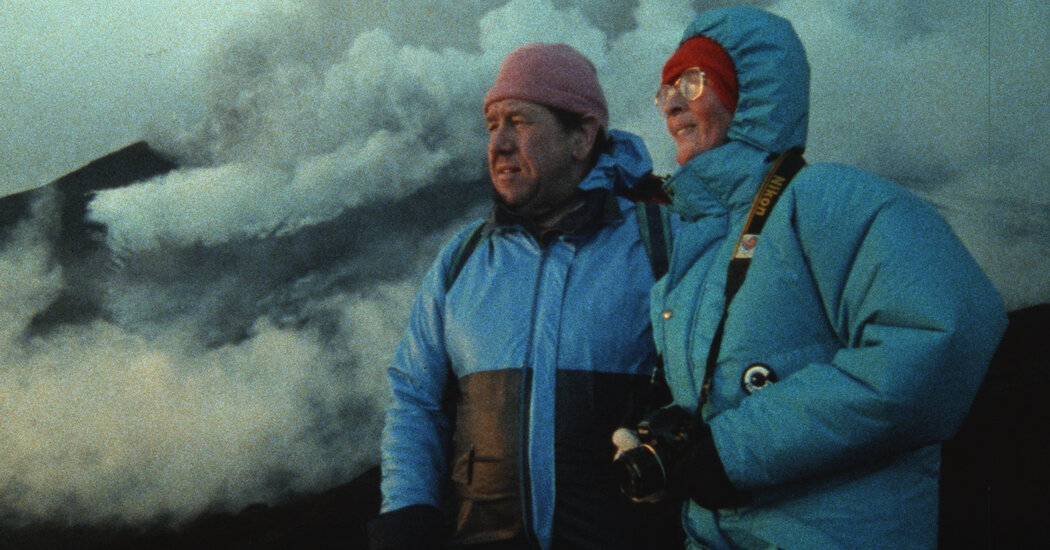 The subjects of Sara Dosa’s new documentary “Fire of Love” are Maurice and Katia Krafft, married French scientists who devoted their lives to the study of volcanoes. Really, though, it might be more accurate to describe the couple, who died in a volcanic eruption in 1991, as co-directors, since they were the ones who captured the most arresting images in this curious and haunting film.

Those images, still and moving, record the before, during and after of volcanic eruptions on several continents. Some of these are terrifying, as molten rock shoots skyward and clouds of ash roll down the sides of mountains. Others are eerie, capturing the glow of an active crater or the otherworldly contours of newly formed rock. The sheer existence of these photos is mind-boggling when you think about how close the people with the cameras must have been to the lava and the smoke.

The Kraffts, who grew up in Alsace, France, and met at the University of Strasbourg, were devoted to each other and smitten with Etna, Stromboli, Nyiragongo and other volatile spots. As the film tells it — and archival interviews and broadcast appearances confirm — their shared interest wasn’t just a professional matter. It was an all-consuming and ultimately fatal passion.

Maurice was a geologist and Katia a geochemist, and the difference between those disciplines is an occasional source of nerdy humor. A geologist, Maurice suggests, is someone who paddles an inflatable canoe into a lake of sulfuric acid, while a geochemist has the good sense to stay on shore taking measurements and collecting samples.

The narration, read by Miranda July, underlines temperamental contrasts between the scientists that are seemingly confirmed by the pictures. Katia, birdlike and ironical, kept track of the data and took the still photographs, while Maurice, who resembles a curly-headed lion cub, gave public lectures and wielded the movie camera.

Out in the field, tiptoeing across lava streams or trudging through ash and mud, they wore matching red wool caps and silver insulated jumpsuits and, sometimes, metal helmets that extend over their shoulders to protect them from molten debris. “Fire of Love,” which also includes animated sequences, has some of the willful enchantment of a children’s book. Even Maurice’s flights of philosophical rhetoric — he and Katia were French intellectuals, after all — have a naïve charm, expressing a sense of inexhaustible, starry-eyed wonder.

The objects of that fascination are lethally destructive and scarily unpredictable, but, for the Kraffts, the danger was part of the allure. “Fire of Love” is a romance shadowed by tragedy. The fact of the couple’s death is established early on, and by the time the details are filled in at the end of the movie, you more or less know what’s coming. What might look like recklessness is part of a devotion that takes on a moral — even spiritual — dimension.

There’s a reason that volcanoes have, throughout human history, been worshiped and placated like gods. Maurice and Katia Krafft represent a secular, scientific variation on that old-time religion. They craved sublimity, but they also wanted to be helpful. “Fire of Love” makes much of the distinction between relatively predictable “red” volcanoes and their more deadly “gray” counterparts — “the ones that kill,” as Maurice puts it.

In their last years, the Kraffts spent most of their time studying the killers, hoping to discover patterns that would enable people living in the path of destruction to escape. They risked their lives to do this, and the movie argues that their sacrifice wasn’t in vain. More than that, it preserves their work and their idiosyncratic, unforgettable human presence.

2022-11-03
Gujarat ‘Kham-Kokum’ formulas flew away from PM Modi’s ‘TINA’ theory in the laboratory of Hindutva!

2022-10-28
Petrol Diesel prices recorded a fall! Will you get the benefit of cheap petrol and diesel, read full news